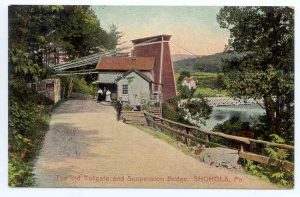 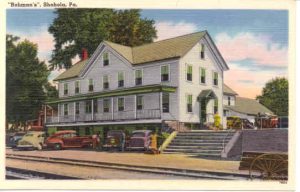 Shohola and Shohola Glen are located in the northeastern corner of Pennsylvania in Shohola Township, Pike County. The word Shohola is from the Lenni Lenape Indian nation and translates to “Place of Peace” or “Peaceful Waters”. The area was first occupied more than ten thousand years ago by the Paleo-Indian people. Tom Quick of Milford, PA who built a cabin on the Shohola Creek in 1741, was the first European to settle in the area. The township was formed as a municipality of the Commonwealth on September 25, 1852. Unfortunately he never saw is dream come to fruition as he died in 1882 of a stroke before any part of the “Queen of Summer Resorts” was built. The property was sold to the “Blue Stone King” John Fletcher Kilgour in 1882, who developed the site into prominence as an unrivaled summer resort.

In the Glen, Kilgour built pavilions, galleries, amusement rides, a huge dancing and roller-skating platform under the Shohola Viaduct on the Erie Railroad, and a large dining hall and kitchen. He constructed paths and rustic bridges across the Shohola Creek and throught the park to showcase the natural beauty of the Glen. Pools of water and formations named Cascade Cavern, Bell Rock, Devil’s Pass, Hell Gate, Terror Grotto, Satan’s Nose, and The Spirit of Dark Waters were some of the names given to these places of natural beauty. He also constructed an “Aerial Tramway” that spanned the glen at a height of more than 100 feet above the Shohola creek.

The Great Erie Railroad Shohola Viaduct over the Shohola Creek in Shohola, Pa. 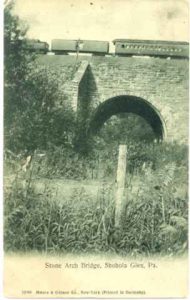 The dance floor deserves special mention due to its location under the Great Shohola Viaduct built by Jacob Perschbacher in 1870. The floor was 25 feet above the water of the Shohola Creek and 15 feet below a balcony where the bands played music. The viaduct was built with hand cut stone to replace a wooden trestle to carry the Erie Railroad over the Shohola Creek.

Some of the outings at the Glen were wild and raucous. A group of coal miners from the Scranton area arrived on a thirty cars excursion train. When a sudden Pocono thunderstorm rained down, the large boisterous, inebriated crowd overturned stands, stole money and goods, and damaged park property. With swinging sticks they turned on the manager who escaped to the Shohola Glen Hotel with a large money bag of the day’s receipts. Gambling and drinking occurred frequently in the Glen when the park was reserved by private groups and gave the Glen a bad reputation locally.

The park contained a large lake for swimming, boating and fishing, a bath house with pools for the medicinal effect of a dip in the fresh mountain waters. The park also included Bowling Alleys, Photography studios and the famous water powered, 1.2 mile long “Shohola Glen Switchback Railroad”, the forerunner of the modern roller coaster.

The railroad was built in 1886 by John Kilgour at a cost of $20,000, a significant investment at the time. The attraction was constructed on a gauge of 4 foot 3 inches, using track and coaches salvaged from the Pennsylvania Coal Company Gravity Railroad which had closed a year earlier after being converted to standard gauge. The car lift was powered by water from a large wheel in the old 1790 saw mill built across the creek. It passed over a 200 foot wooden trestle, and passengers were treated to a thriling ride in one of four coaches carrying 25 to 40 passengers each.

With the death of John Kilgour in 1904 and the discontinuation of the excursion trains from New York City and Scranton, the park closed in 1907. Ironically, the Pennsylvania Coal Company leased the property and constructed a second large sawmill on the creek and clear cut the forest until the 1920’s.

The picture link will take you to a file of many old and new pictures of the Glen.

In eighty years nature has reclaimed the Glen and very little remains of the park or sawmill. The Gravity RR coach “Pioneer” was preserved and resides in Hawley, the eastern terminus of its original run.

he steep rocky walls of the Glen exceeded 500 feet elevation in places and the natural beauty of the park was arresting. During the peak years the park attracted almost 10,000 visitors per day. There were more than 80 hotels and rooming houses in the area for overnight guests. The park was lighted by colored electric lights, Lanterns and torches with power being generated on site from a turbine in the old mill.

There are many legends that John Kilgour created or expanded upon to attract visitors to the park. One tells of a silver mine used by the Lenni Lenape Indians that had an entrance in the Glen. It opened into subterranean caverns and extended more than a mile to an exit near the Panther Creek north of Shohola. Another tells of a large rock called Lover’s Leap where a distraught Indian maiden jumped to her death. 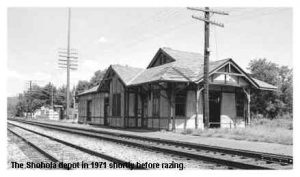 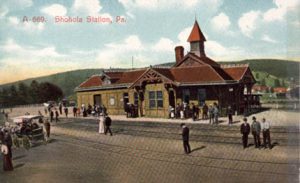 The beautiful Shohola Depot trimmed in gingerbread, welcomed thousands of visitors per day to the Shohola Glen Amusement Park and the Shohola area. From 1885 until 1907 the Erie Railroad ran excursion trains from New York City and Scranton, Pa. to Shohola.

A visitor to the glen today has to look carefully to find remnants of the Grand Amusement Park. The foundation of the switchback trestle and a portion of the 120 year old wire rope invented by John Roebling that lifted the cars up the mountain, remain covered in grass and vines along side the Twin Lakes Road. The railroad right of way is still visible with the rotted remains of ties and even a few spikes along the path. A portion of the Switchback Gravity railroad was used into the 1920’s to transport lumber from the Shohola Lumber Mill located in the glen, to the Erie Railroad siding in the village of Shohola. There are still remains of the paths and grottos in the upper glen with the occasional foundation of various structures throught out the park. The Great Shohola Viaduct, damaged by hurricane Diane on August 22, 1955 still contains remnants of the large dance platform and balcony that provided entertained for millions of visitors more than 100 years ago.

I have many additional pictures (Some recently taken in August of 2002), and some maps of the Glen and the Shohola area on my College Web Site. Please take a few minutes and browse through the files. There are pictures of remains of the glen, images of old flyers and pamphlets that I own, old postcard photos and maps of the area. Jonathan, my youngest son and I even found a few old caves that we explored looking for the Lenni Lenape Silver Mine. We also found many old iron objects that we have no idea of the original purpose. We did not disturb or remove anything from the glen. I tried to take pictures from the same angle and position of the old postcards that I own. Check out the old and new views looking up the plane on the gravity railroad and you will see that it really hasn’t changed very much in more than 100 years.