The History Of Camp Shohola

The history of Camp Shohola for boys is richly mixed with the history of the local area. Some of the earliest local economy was related to the timber industry. At one time a logging company in Shohola PA cut timber and floated the logs down the stream to a mill, the remnants of which remain to this day. After the logging company ceased operations in the area, the property was purchased as a private summer camp. Several cabins were built at that time, and the dining hall, in its earliest rendition before several additions, was placed in the center of it all.

Camp Shohola for Boys was at one time called Camp Skyland for girls, and Camp Shohola for girls. In 1943, Frank Barger and his wife Helen purchased it. Frank, known as “Pop Barger”, was a school teacher and administrator at the Sidwell Friends School in Washington DC. He was an excellent athlete who loved the outdoors and had previous camping experience that sold him on the value of camping as a developmental benefit to children. He decided to operate Shohola as a boys’ camp and seven years later purchased Camp Netimus for girls with several partners to operate as Shohola’s sister camp.

When Pop Barger passed away in 1967, his son Frank Barger, known as “Kit” Barger, took over directorship. The kit was also a teacher and administrator at Sidwell Friends and, having grown up at Shohola, needed no convincing about the value of the experience. He and his wife Marilyn operated the camp until they retired in 2002. Under Kit’s and Marilyn’s directorship the camp grew and thrived with the addition of many new activities and facilities. Even so, one thing that was always preserved was the “Classic Camp” feel which is so noticeable when you visit Shohola. The beautiful natural setting of camp remains quite intact to this day, and the growth in enrollment to approximately 160 boys has not changed the fact that Shohola feels like a nice small camp where everybody knows each other.

Kit’s son Duncan Barger and his wife Holly assumed the directorship of Shohola in 2002 and are very proud to be building on the firm foundation laid by previous generations. Camp’s traditions remain vibrant and healthy even while the program continues to evolve in order to embrace the interests of today’s boys. Come and see for yourself why Shohola is still going strong after three generations!

The Philosophy of Camp Shohola

Our goal is to provide a happy and safe environment where each camper has fun, has a positive experience, matures, and has the opportunity to expand his boundaries and self-knowledge. The belief that each individual is special is the center of our philosophy. Our challenge every summer is to nurture that specialness whether it is an athletic skill, artistic talent or a compassionate heart. Shohola is a community that encourages campers to reach, with the expectation that others will give support and encouragement.

Benefits of a Small Camp

The benefits of a small camp are simple. At Shohola, each child has more personal attention from the counselors, better supervision during activities, and everyone in camp knows each other by name. Shohola parents can call any time and expect to speak to the director. What’s more, they can expect the director to know their child by name. Camp Shohola has one of the best supervision ratios in the camping industry with nearly a two-to-one camper to counselor ratio. 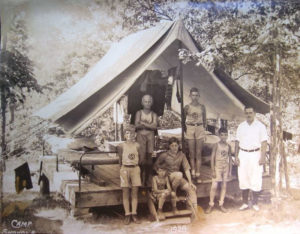