A SHORT HISTORY OF CAMP SHOHOLA AND THE GREELEY AREA

The word “Shohola” is defined by local historians as meaning peaceful or tranquil, usually referring to the flow of the water of the Shohola Creek. Camp Shohola is located on part of the original “Walking Purchase,” land “sold” by the Lenni Lenape Indian nations to William Penn in 1737. Just outside of the community of Shohola, the “Place of Peace”, archaeologists have discovered remains of villages and camps of the Lenni Lenape and their ancestors indicating that have inhabited the lands around Shohola for more than 10,000 years. The Lenni Lenape departed the area in the late 1700’s for Ohio and Oklahoma where their descendants live today. The area was explored and settled by Europeans just after the American Revolution. With the discovery of coal, and the construction of the Delaware and Hudson Canal and Gravity Railroads in 1828, the area experienced significant increases in population with many communities being founded. 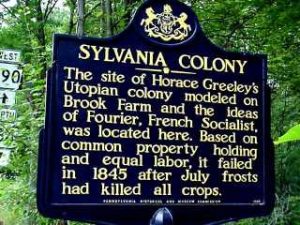 In 1841, Albert Brisbane, and a group of men, including Horace Greeley, organized the Sylvania Association, a Socialist Commune, on the banks of the Taylortown Creek just east of camp. The colony consisted of 3200 acres of land, including the land which is now Camp Shohola. The experiment in socialized living failed when the young, inexperienced, wilderness challenged colonists did not plant crops in the summer of 1845, claiming a “July Frost” had blackened their fields. The “Utopian” colony was immediately abandon. There are many remains of the old Sylvania Association including the foundation of the 1828 grist mill. 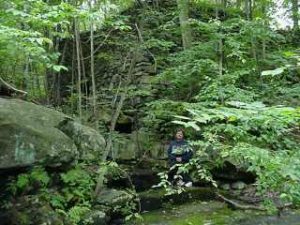 The area was revitalize with the construction of the Erie railroad in 1848. The Pocono Mountains provided coal, lumber, bluestone and ice to metropolitan areas up and down the east coast. Unfortunately Shohola was also the location of one of the worst railroad accidents in the history of the railroad industry, The Great Shohola Train Wreck”. During the American Civil War, a troop train collided with a coal train killing or injuring more than three hundred soldiers.

In the mid 1870’s the Taylortown Creek was dammed, forming Lake Greeley. A logging camp and lumber mill were established on the land where Camp Shohola is today. There are still many remnants of the 140 year old facility with the original company store of the Greeley Lumber Company being used as our CommTech building. Constructed in 1879, it is easily the oldest building in camp. Another old building is the original two seat, plaster walled, out house of the Taylor family. Used today as our archery shed, it was constructed in the early 1920’s and even had an electric light for those night time trips. 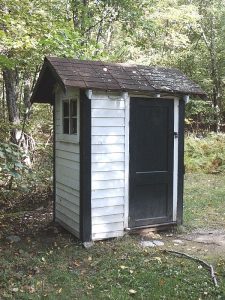 Electricity to the community of Taylortown was supplied from a generator located in the old sawmill on the Taylortown Creek. Foundations and stone walls of the old Taylor homestead, accidentally burned in 1931, remain on the north side of the lake. 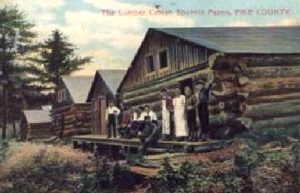 This is why Camp Shohola is on Lake Greeley. 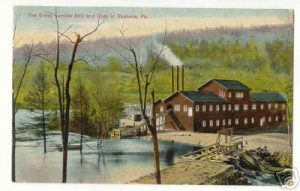 More than 300 lumbermen and boys worked in our camp until the forests were cleared of trees. The community of Greeley, originally called “That Greeley Place” in reference to the Sylvania Association, was formed as a result of the logging industry, with a post office being established in 1892. After the area was cleared of lumber, the loggers moved on, abandoning the mills, buildings and cabins. The few remaining residents used Lake Greeley as a supply of ice in the winter and for recreation in the summer. 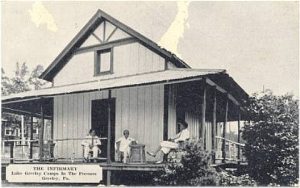 Camp Shohola is one of the oldest summer camps in the country, and was officially formed as a summer camp in 1903, with the construction of the Lake Greeley Lodge for dining and recreation. The owners improved some of the lumber camp cabins for sleeping, constructed new recreational facilities, and named the organization “Camp Shohola” one of the Lake Greeley Camps. The large heated lodge, with 12 bed rooms, would accept visitors for 1 dollar per day during the summer camping season, with camper cabins being available before and after the regular camping season for families to enjoy the beauty of the Lake Greeley area. Famous author Zane Grey, enjoyed fishing on Lake Greeley and stayed at the lodge many times around the turn of the last century. Link to the Shohola Glen Resort page.With the well known “Shohola Glen Summer Resort” and amusement park nearby, the area was fast becoming an escape from the summer heat of the cities. 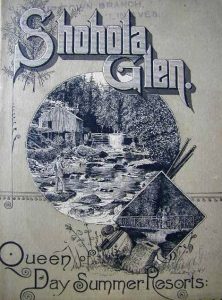 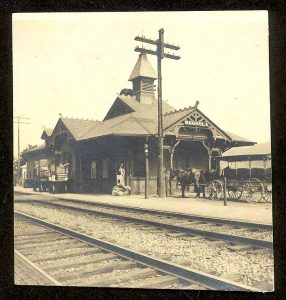 The ornate 1852 Shohola Depot, on the Erie Railroad, greeted thousands of visitors daily to the area, mainly due the the one dollar round trip excursion fare. There were more than 100 resorts, rooming houses and hotels in Shohola Township by 1900. Before the days of interstate highways, most Camp Shohola campers, along with thousands of other boys and girls, would take the train to camp each summer. Just like we hire buses for transportation today, we would contract with the Erie Railroad for entire coaches, to transport boys and girls to summer camps. Campers would take scheduled trains to Hoboken, NJ, and with thousands of other young campers, board one of the many “Summer Camp Specials” serving hundreds of camps in the Pocono and Catskill Mountains. It was certainly a logistics nightmare at the Hoboken terminal during the peak years. The Erie Railroad discontinued the summer camp specials after the 1962 summer season with other railroads following shortly thereafter. 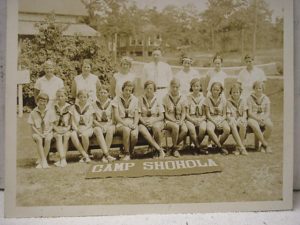 In 1921, the Philadelphia-area Catholic Church began a summer family camp program on our side of the lake using some of the remaining buildings vacated by the logging operation. The cabins were rebuilt and new buildings were constructed. The oldest cabins in camp, re-constructed in the 20’s and 30’s, are 3,4 and 5 on the lake side of the hill, plus 8, 10, 11 and 14 on the north side. Cabin ten, originally the directors home, was called “The Castle” because it sat on the top of the hill overlooking the other cabins. If you look carefully, you can see nail marks on some of the boards of the old cabins, especially the roof boards, indicating they have been salvaged from earlier buildings. 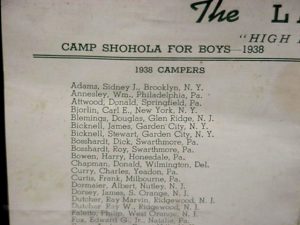 In 1925, Carl Hummel, pictured above in 1928, purchased both of the Lake Greeley camp sites, significantly expanding the Lake Greeley Camp facilities. Please notice the octagon shaped cabin in the background. With both camps initially called Camp Shohola, in 1932 he renamed the girls camp located on our side of the lake, “Camp Skyland for Girls” which continued until 1939. Please check out the eighty year old pictures of the camps in the Shohola Museum. The Camp Shohola girls were fortunate, as we were one of the first camps the U.S. with bathroom facilities in each cabin. We also received our first telephone in 1932 with the number R22, for “Rowlands 22”. Our recreation hall was constructed in 1932 to allow separate performing arts programs for the girls. If you examine the walls of the rec hall carefully, you can find names and dates of Camp Skyland girls from the 1930’s. With no dining hall on our side of the lake, the girls would walk across the Greeley Lake Road to eat in the Lake Greeley Lodge dining hall, with the Boys from Camp Shohola. Across the lake, “Lake Greeley Camp”, has been owned by the Buynak family since 1961 and is still using the same name as when established in 1903. The 100+ year old lodge and uniquely designed cabins are well maintained and in excellent condition. 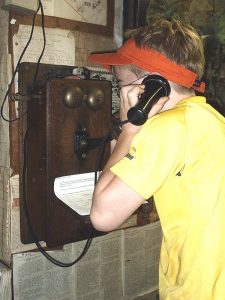 In 1940, Mr. Hummel sold Camp Skyland for Girls, and the name “Camp Shohola” to Cecil Rodney and his two partners thus forming “Camp Shohola For Boys” on our present site. As a completely separate camp for the first time, the construction of our own dining hall was a necessity. Our dining hall was built on the location of the old lumber camp mess hall. It was intentionally placed on top of a naturally flowing artesian spring, that allowed a continuous supply of fresh clean water for cooking. The spring continues to flow today into a small pond in from of the CommTech building, and can be used a a backup water supply for the camp. The dining hall has had nine additions since initial construction in 1940. The first few years were very difficult due to the start of the Second World War and Mr. Rodney quickly placed Camp Shohola for sale. Our Camp Shohola newspaper “The Argus” was first published in 1940 and we have an original issue of the first printing in our museum collection. The camp newspaper was previously called the “Lake Greeley Trail”, first published in 1903. 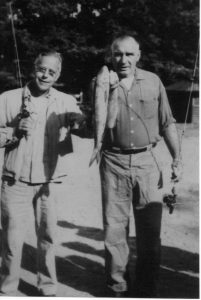 Benjamin Frank and Helen Barger, bought Camp Shohola from Mr. Rodney and his remaining partners in 1943 and took on a new partner, Edwin Zavitz. In 1949, Frank and Helen Barger purchase the remaining shares held by Zavitz and became sole owners. “Pop” Barger started the traditions of signing the scroll, taking group photos resulting in a complete pictorial record of all campers and staff who have come to camp since 1943. He also recorded the Green and White competition winners at the front of the dining hall which remain today. In the picture on the left, Harley Baker and Pop Barger show off a fish supposedly caught in Lake Greeley. Many years later they admitted to purchasing the fish at the Hawley Fish Market and claiming it was from the lake.

Frank C. Barger took over the leadership at Camp Shohola after his father’s death in 1967. He, and his sister Debby also have had a long association with Camp Netimus, our sister camp in Milford, PA, which was purchased in 1950. 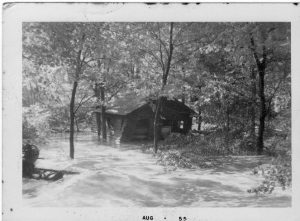 Camp Shohola has experienced significant flooding of the Taylortown Creek over the years, but Hurricane Diane, in August of 1955 was by far the worst. We lost tennis courts, the main bridge, the flood control dam, and had major damage to the barn and nature cabin. The nature cabin was lifted from the foundation and floated downstream. 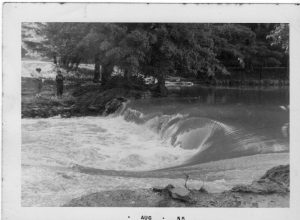 After colliding with two trees and using automobile jacks to lift the building, a new foundation was placed underneath. The building is one a very few in the country where the location was not selected by humans.

As director, Kit with his wife Marilyn, increased the size of camp from 127 to 165 boys, added activities and facilities which included a soccer field, two more tennis courts, a new archery range, pavilion, CommTech addition, two buildings for non-cabin staff, a ropes course and windsurfing kayaking, and bicycling programs. Our CommTech program, started in 1966 by Tom Gibson, is one of a kind, with activities unique to the summer camping industry.

When Kit retired in 2001, his son Duncan with his wife Holly, became a third generation of Barger family owners and directors.

So when was Camp Shohola really founded?

Most of the printed promotional materials refer to 1903, 1925 or 1943 as the founding dates of Camp Shohola, with 1943 being used most often today.